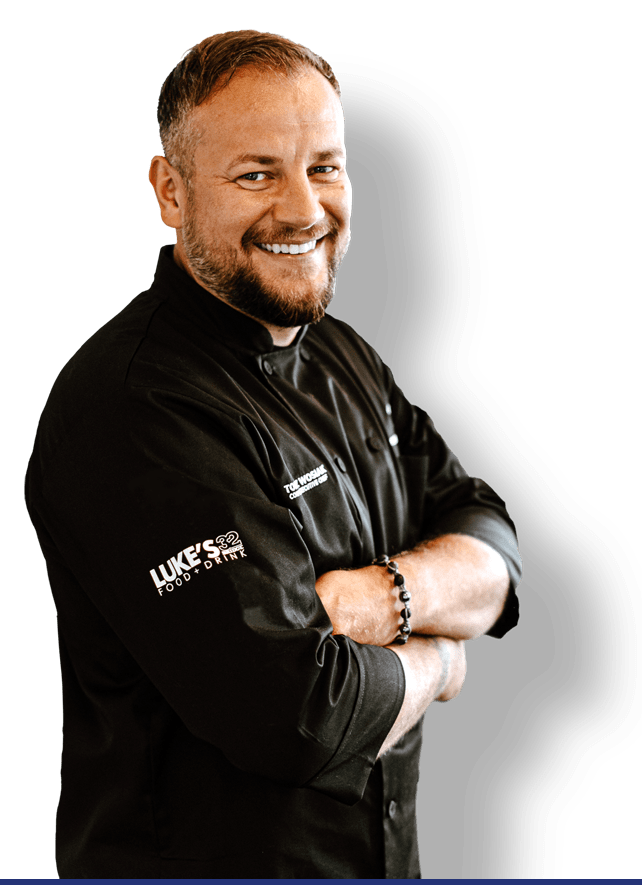 Learn what makes our food special! 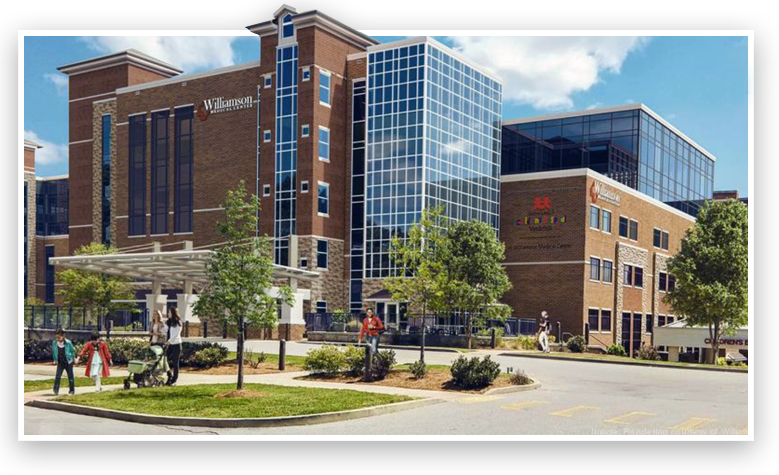 Construction is set to begin in April and is expected to be completed by 2024. The improvements planned include: The expansion of the facility's emergency room from 28 to 34 beds, including the addition of a behavioral health pod. The expansion of obstetrics from 28 beds to 34 beds. Be on the lookout for Caroline and Luke, and if you can...support the Williamson Medical Center. 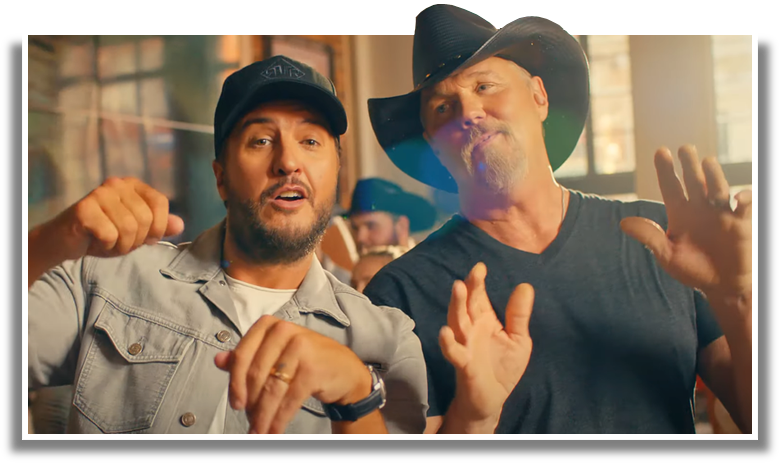 Tuesday, September 28, 2021, - Watch Trace Adkins, Luke Bryan and Pitbull perform "Where The Country Girls At", shot on-site at our very own Luke's 32 Bridge. Watch the Video then come on down to Luke's 32 Bridge to see the sites, enjoy great food, and a cold drink. We're guessing you'll run into a country girl, or two, or three. 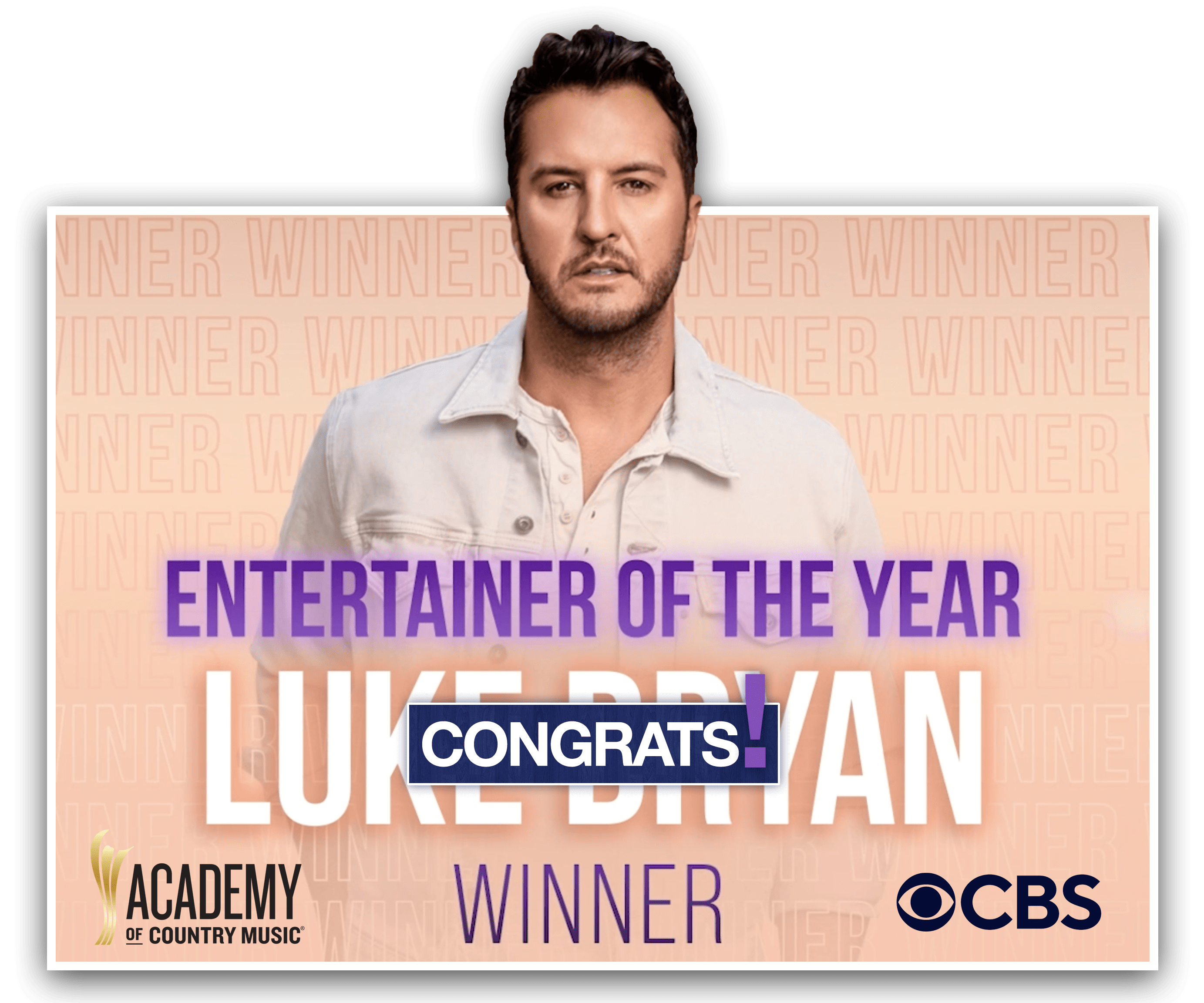 LUKE BRYAN IS
ACM ENTERTAINER OF THE YEAR

Sunday, April 18, 2021 - Luke Bryan won the top prize, entertainer of the year, at the Academy of Country Music Awards, accepting the honor via remote from Los Angeles, where he had just made a surprise return to his “American Idol” hosting duties after recovering from COVID-19. Bryan had publicly announced only six days ago that he was diagnosed with the virus. Luke said, “Certainly the key to feeling better with having COVID was I very fortunate to not have a long set of symptoms. It was still quite challenging for a couple days, but thank God for health.”

He described himself as wanting to get to 75 and look back on his body of work with pride without regard to which years he won awards. “I loved the years when I didn’t win because they challenged me and made me work harder… and the years I did win, you could probably go, ‘You took that for granted; that was a shame.’ The bottom line is to have your feet on firm, solid ground through all of this. When you start having success in music, you can have a year when you aren’t happy with who you are as an artist but things can happen (anyway). I think just having a level-headed approach to a scenario where you can do this for many, many years” is key, he said. 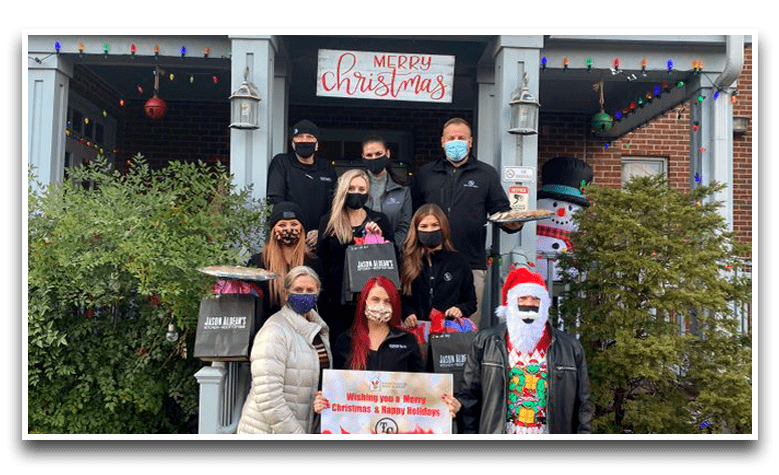 On Thursday, December 17, TC Restaurant Group staff and musicians returned to the Ronald McDonald House Nashville to help brighten the holiday season for children and families of the house.

Each child received a gift bag of toys while TC Restaurant Group chefs brought homemade Christmas-themed cookies and other treats for the staff, residents, and families. The musicians and staff members of the hospitality company rounded out the visit by singing Christmas carols in the parking lot for children, while maintaining social distancing guidelines. 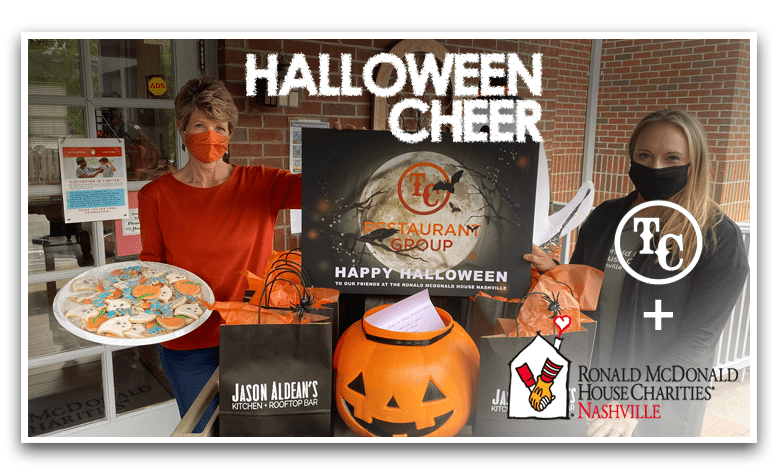 TC Restaurant Group helped the children and staff of Ronald McDonald House Nashville feel a little more festive this Halloween, by bringing bags of treats, candy and cookies in a “reverse trick or treat.”

TC Restaurant Group chefs made homemade themed cookies in the shapes of ghosts, bats and pumpkins for the staff, residents and families. The hospitality group also put together gift bags with games, toys, masks and Halloween goodies for each child. 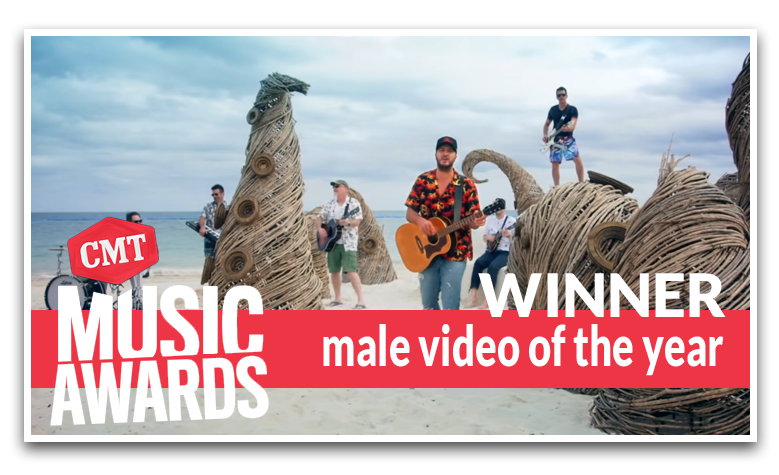 Congrats to Luke, 2020's CMT Male Video of the Year For "One Margarita"

Luke Bryan's hit "One Margarita" was a hit with fans, and a hit on the beach. 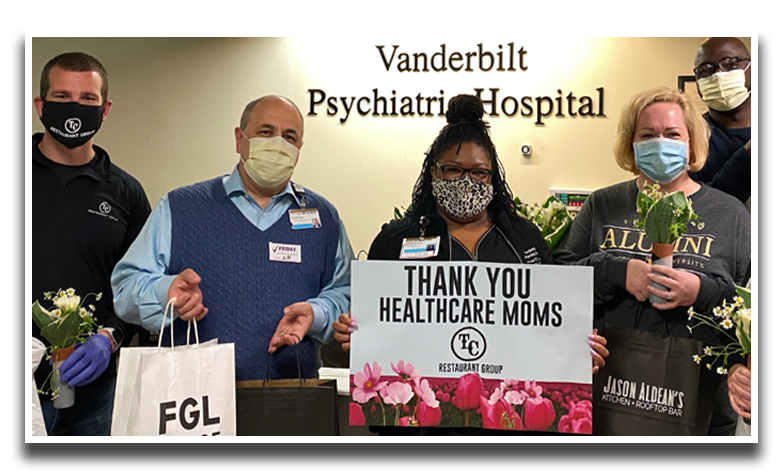 FGL House, Luke’s 32 Bridge and Jason Aldean’s Kitchen and Rooftop Bar give to mothers in healthcare amid COVID pandemic.

TC Restaurant Group honored Vanderbilt mothers on the front lines this Mother’s Day with a “comfort food package,” flowers and seven-layer chocolate cake for lunch on Friday, May 8. Forty women were honored during that afternoon including nurses, doctors, physicians, radiologists, and medical assistants.
READ THE STORY 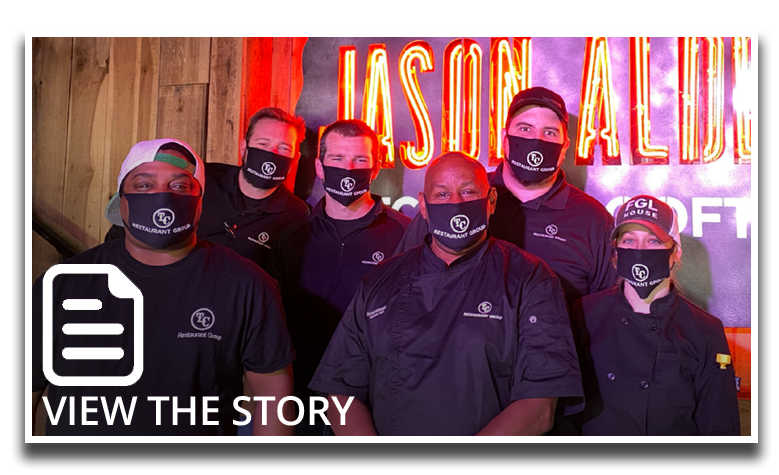 TC Restaurant Group and the American Red Cross joined forces to raise nearly 50 units of blood during TC Restaurant Group’s Blood Drive on Broadway April 21 - which, according to the Red Cross, is enough to impact more than 150 lives. 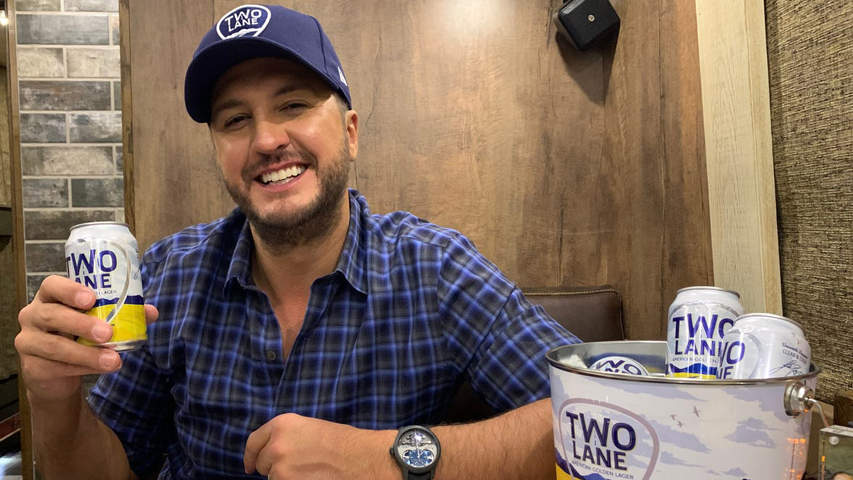 Feb 28, 2020 – Luke's stepping into the beer business! Luke and his  latest venture, "Two Lane American Golden Lager" was recently featured in a story by USA Today. It highlights Luke's taste for beer, and talks about his collaboration with Constellation brands.

Enjoy the story, and then, when you "can", go out and purchase some Two Lane Lager. 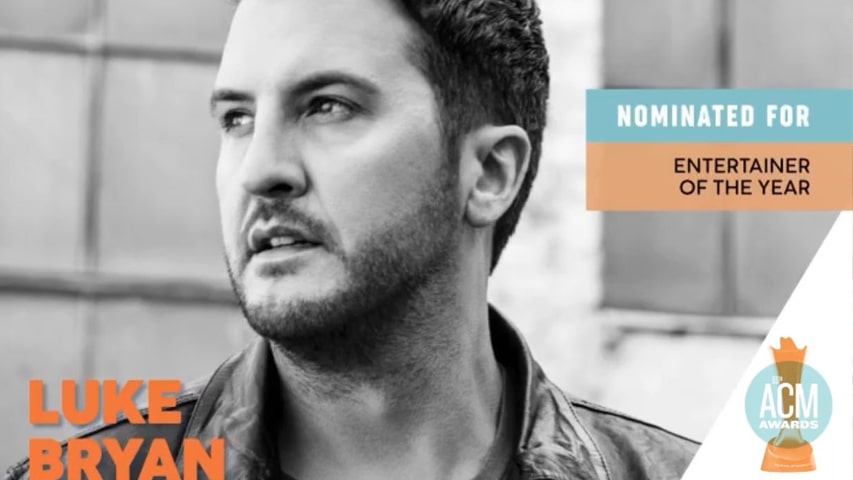 Luke Bryan Nominated For ACM Entertainer of the Year

Feb 27, 2020 – Luke's 32 Bridge is happy to announce our own Luke Bryan has just been nominated for ACM Entertainer of the Year. WHOOP WHOOP! How many Two Lane Lagers are you celebrating with tonight!? If you’re a fan and at "The Bridge" this week... make sure to toast Luke’s Entertainer of the Year #acm nomination! 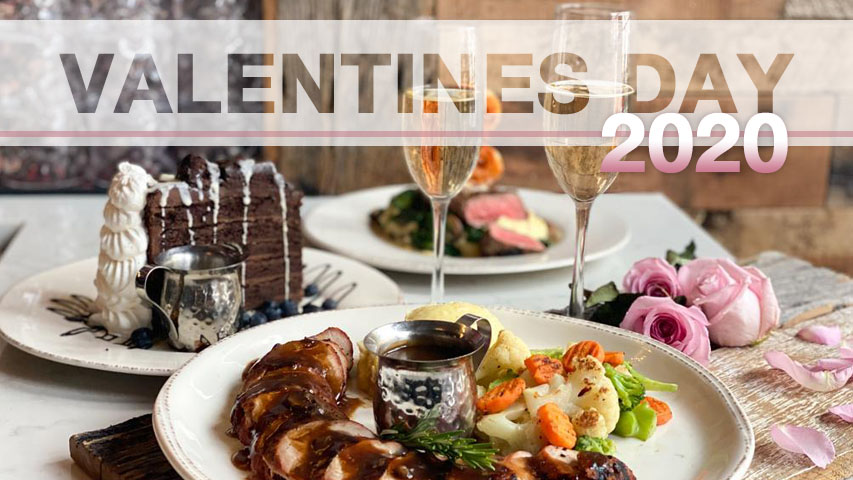 Feb 3, 2020 – Luke's 32 Bridge was recently featured in an article titled "Business of Love" on BizJournals.com. Luke's, along with other restaurants and bars in Music City, are offering a special menu for lovers on Valentines Day 2020.

Like everyday...we're obviously offering the best food & drinks...and are serving Sirloin with Shrimp Pinwheels, Pork loin with Demi-glaze, specialty drinks,  and 7 Layer Chocolate Cake to share. Come down to Luke's this Valentines Day...February 14th and make it a tradition. 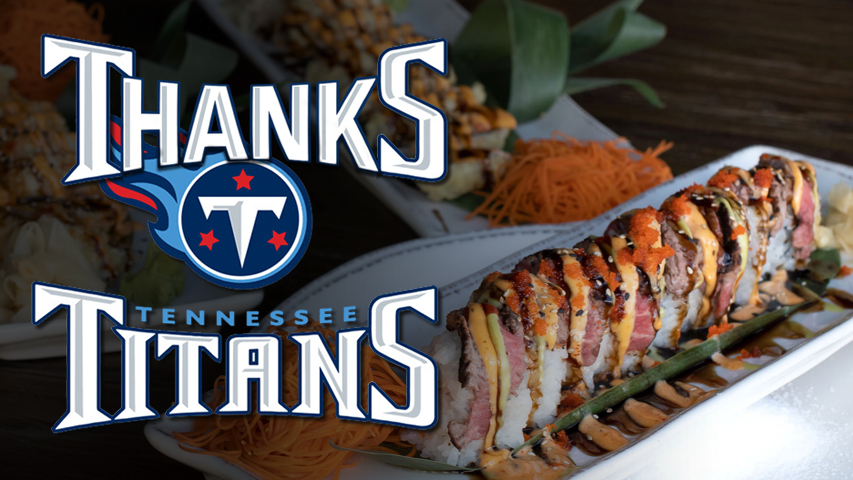 Jan 19, 2020 – Luke's 32 Bridge was recently featured on WSMV, after the unfortunate loss to the Kansas City Chiefs  in the AFC Championship game. Many fans came to watch the game, and stayed to drown their sorrows, after the tough loss.

The team had a great season, and Luke, the city, the great fans, and TC Restaurant Group properties including Luke's 32 Bridge would like say "Thanks" for the great ride. We all can't wait until next year. 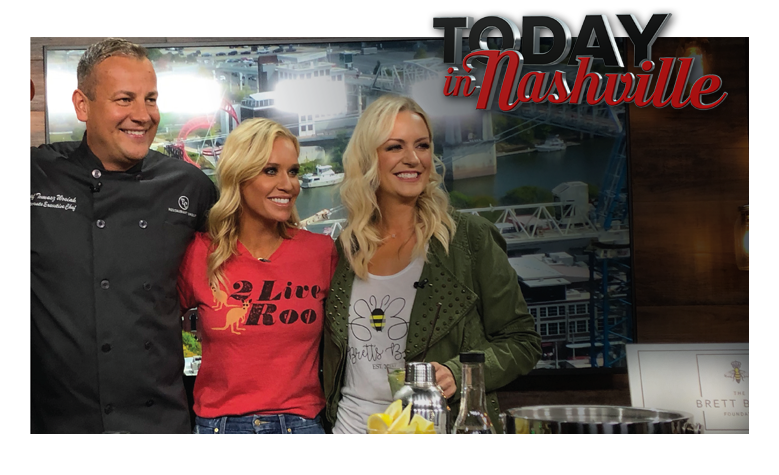 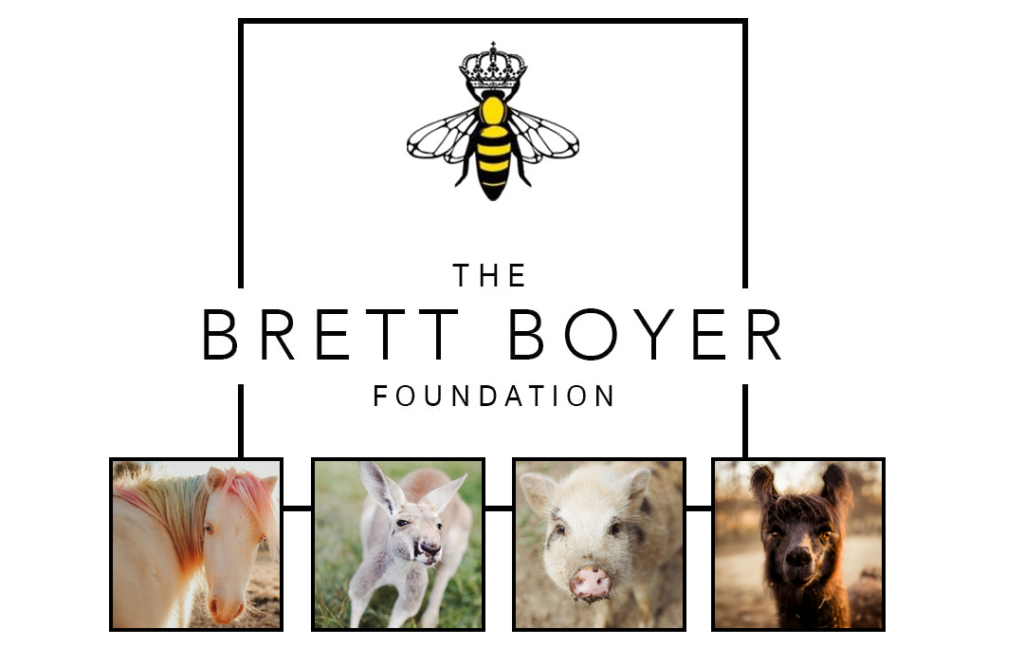 Jan 19, 2020 – Luke's 32 Bridge was recently featured on WSMV, after the unfortunate loss to the Kansas City Chiefs  in the AFC Championship game. Many fans came to watch the game, and stayed to drown their sorrows, after the tough loss.

The team had a great season, and Luke, the city, the great fans, and TC Restaurant Group properties including Luke's 32 Bridge would like say "Thanks" for the great ride. We all can't wait until next year.

Oct 9, 2019 – The team behind some of your favorite Broadway bars have announced their partnership with The Brett Boyer Foundation.

TC Restaurant Group is known for bringing many of downtown Nashville’s favorite bars to life, but recently they’ve set their sights on a new project - teaming up with the Brett Boyer Foundation to raise awareness and fund research for Congenital Heart Disease.

Luke’s gift shop will feature Brett’s Barn merchandise, in which 100% of the proceeds are donated directly to the foundation. With one in 100 babies being born each year with CHD, the foundation is committed to raising awareness and much-needed funds for research, and their partnership with TC Restaurant Group aims to assist in achieving that goal. 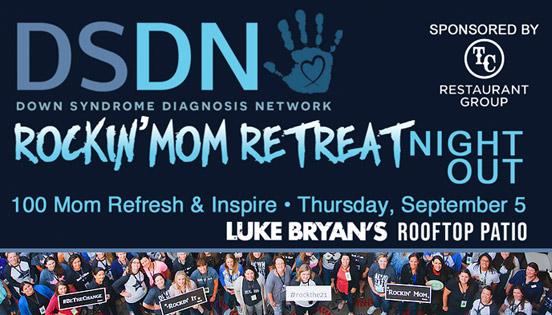 Sep 5, 2019 - Luke's 32 Bridge & TC Restaurant Group sponsored the fifth annual Rockin' Mom Retreat Night Out on the rooftop. Mothers of children with down syndrome are gathering in Nashville the weekend of September 6-7 for the Rockin’ Mom Retreat, an event fostering connections between moms with similar children and allows them to relax and recharge from their daily lives.

Luke and his wife Caroline, along with the TC Restaurant Group, feel strongly about the cause, and want to help out the cause whenever they can.

The event was featured on the WSMV 5 O'Clock News. Check out the video.

Sep 4, 2019 – Luke's 32 Bridge Food and Drink supports the The Brett Boyer Foundation, whose mission is to raise awareness for Congenital Heart Disease (CHD) and fund research to advance treatment options! 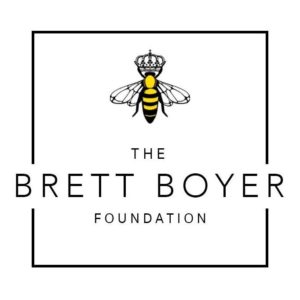 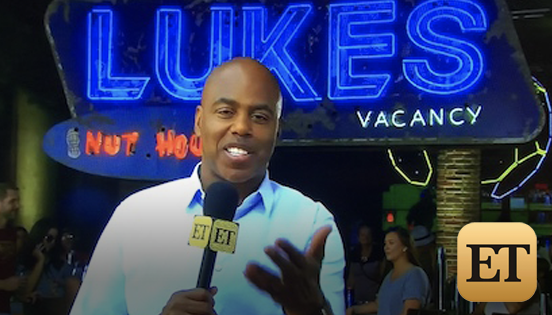 June 7, 2019 - Entertainment Tonight featured Luke's 32 Bridge during the week of CMA Fest. We're happy they stopped by and really appreciate the shout out. Keep 'em coming.

We're A Great Bourbon Bar of the World!

May 23, 2019 – Luke's 32 Bridge Food and Drink has been recognized for our dedication and passion to finely crafted bourbon whiskey. We appreciate the honor. Come join us for a Kentucky Mule, the perfect summer cocktail to enjoy on the rooftop! 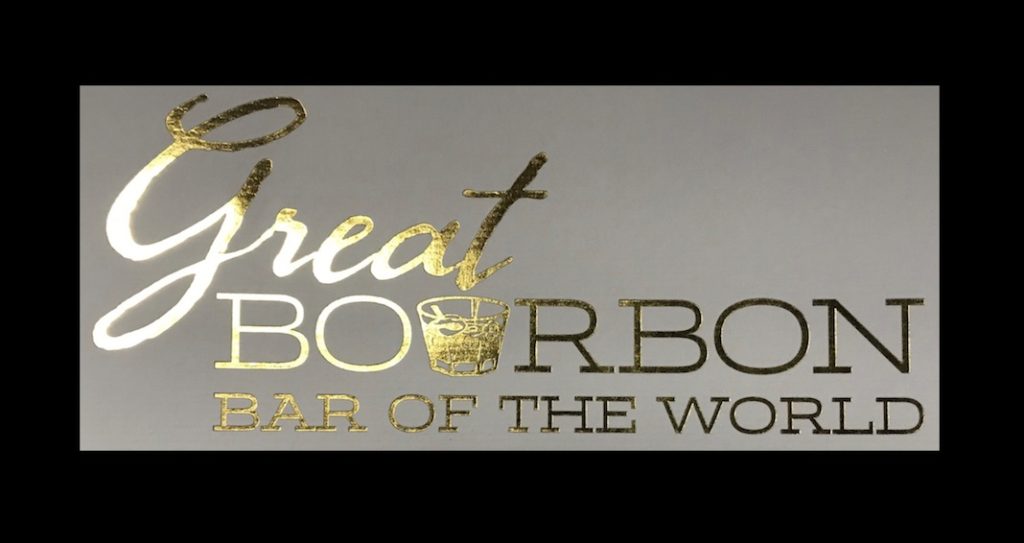 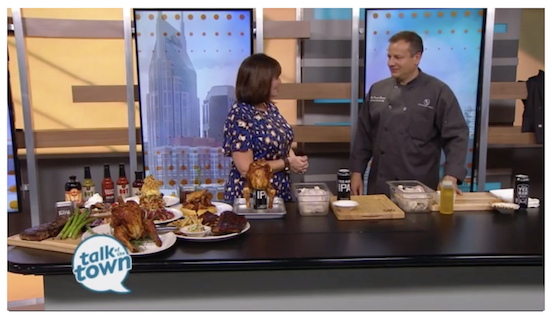 Watch video and get the recipe

Luke's 32 Bridge Chef Featured on Talk of the Town

May 15, 2019 - World-class chef Tomasz Wosiak, who oversees the delicious menu for TC Restaurant Group venues including Luke's 32 Bridge, FGL House, Jason Aldean's Kitchen and Rooftop Bar, and Sun Diner, shares some of his favorite recipes and demonstrates how to prepare beer can chicken!

We are the BEST way to experience the NFL Draft!

April 18, 2019 - Sounds Like Nashville has created a detailed guide for NFL fans on how to have the best possible time during the draft picks! Our building has the largest rooftop on Broadway with best draft view! 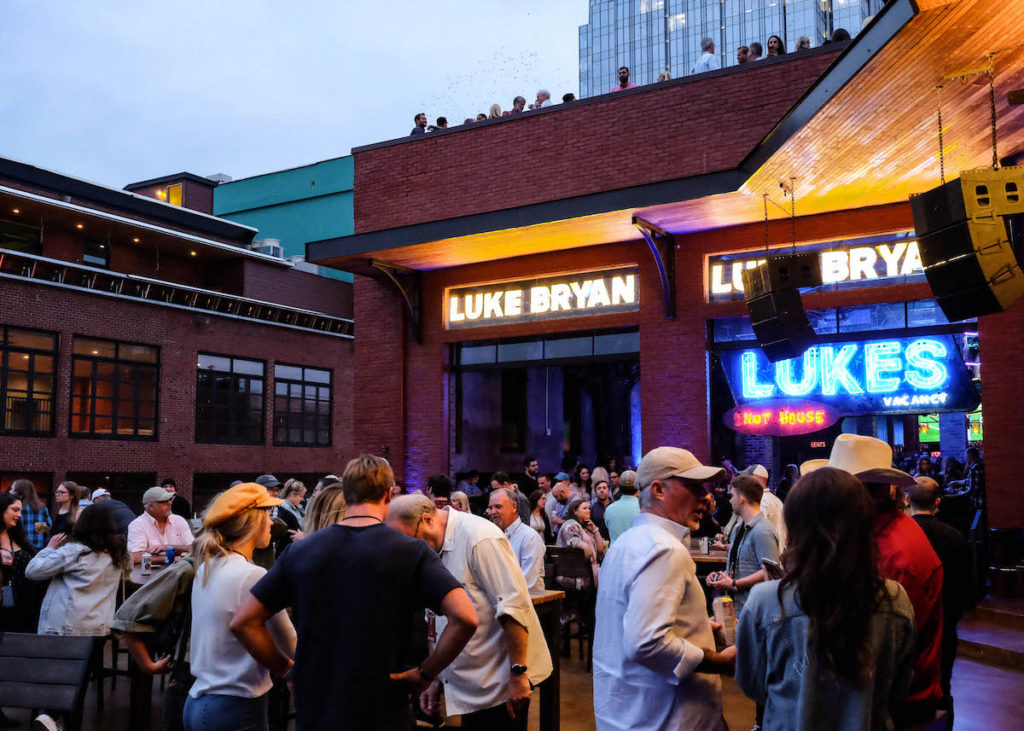 iHearts Crook & Chase stopped by Luke’s to sample our menu favorites! Tune into their countdown show Saturday to hear what they thought!

Luke Bryan Recalls The First Time He Saw His Wife In A Bar: 'I Was Like Hold Up Guys…'

Thanks to the 30,000 fans who celebrated on Broadway with Luke Bryan for our Grand Opening!

Stop by to try “The Bee Sting” and grab some BBF merchandise to support the cause. 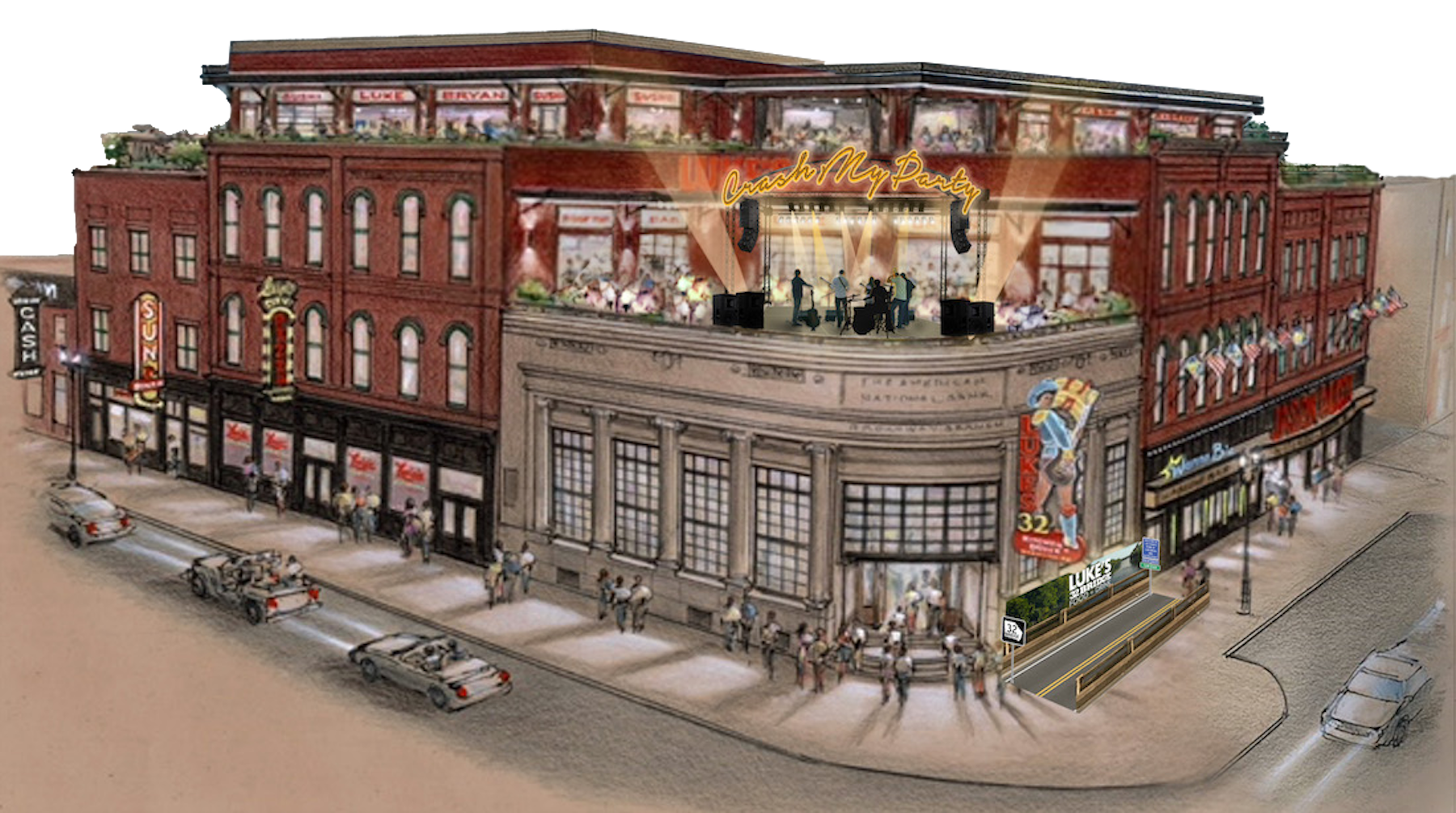 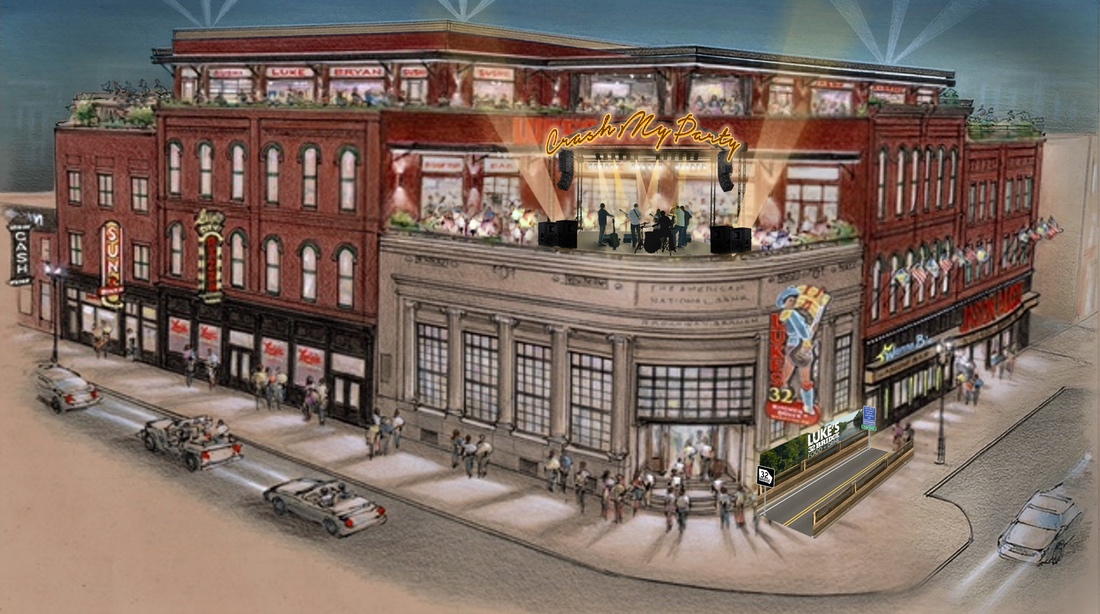